You are here
Home > Nails Tips > Why semi-permanent varnish is bad? 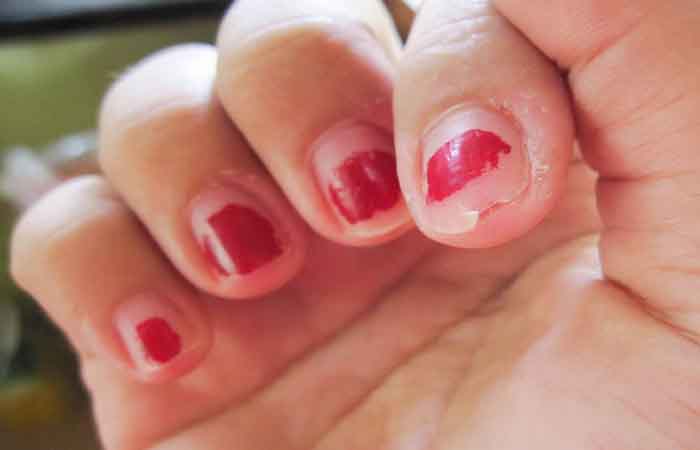 When I removed the semi-permanent varnish, it’s been a disaster. My nails are thin, split, brittle and slightly yellowed. Screwed up, in short. I immediately condemned this crap of permanent varnish before trying to push the investigation further. After all, the winter, the bad weather, the decline in vitality could just as well have been held responsible for this state of affairs.

First, the principle of smothering your nail for more than 15 days non-stop under 4 very thick layers of varnish (base, two layers of varnish then top coat) is not the best idea there is. However, it wouldn’t be much… if the only solution recommended for removing the varnish was not a solvent formulated with cast iron. Basically and for you to play it short, the solvent used to remove the semi-permanent varnish is equivalent neither more nor less to White Spirit in terms of aggressiveness.

Of course, there is an alternative: the nail polish remover based on our good old acetone. For both, you have to soak your fingers for about ten minutes, or wrap them in a paper wrapper with a cotton ball soaked in the solution for the same period of time. And, as it is rare that the nail polish remover, however aggressive it may be, completely gets rid of the varnish, you must then polish the nail to remove the last residues of varnish and in doing so, damage it a little more.

The semi-permanent varnish as such is therefore not necessarily atrocious. However, as long as a solution worthy of the name or, at the very least, less aggressive to remove nail polish is not offered, avoid semi-permanent nail polish… Advice from a friend who flatly apologizes to you having smeared with error without knowing it of its own free will a few months ago!

Hoping to have been helpful! If you want know more nail products, just take a look at our Maryton!